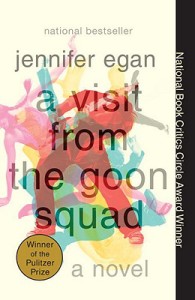 The music industry may link this fascinating collection of characters, but what we experience is each one’s separate, deeply personal movement through time as they dance with their demons. The way forward is murky, as it is in our own heads, but there are insights here that light up the page. We see Sasha, who works for record executive Bennie and is in secret a kleptomaniac, standing by her pile of stolen objects with “a tenderness that was only heightened by the shame of their acquisition. She’d risked everything, and here was the result: the raw, warped core of her life.” Egan’s postmodern techniques of fragmentation and ever-changing perspectives only make us more determined to hunt for these treasures of truth – to seek for answers to how and why people change. We get the sense that even in this vain, selfish world, there are people fighting to be honest with themselves, if only for a moment, people struggling to learn. We find ourselves caring about them, often in spite of themselves.

For writers: If you wonder what agents mean by a literary novel with a commercial hook, here is one answer. Don’t be fooled by Egan’s breezy postmodernism: this is a serious book. Her restless narrative techniques complement the edginess of her chosen milieu, and the prose at the heart of every perspective is powerful and lucid. The insights she achieves come from connecting deeply with her characters and staying with them – from the hard work of laying down character-specific actions and details that lead to discovery and truth. And even though the narrative devices vary all over the place, each is chosen with a distinct character in mind: Sasha is revealed through a reluctant close 3rd; naive Rhea through uncensored 1st; egocentric Lou through distant, ironic omniscience; celebrity Kitty through a crazed interview. Near the end, a child obsessed with the pauses in music only lets us peak in through her charts. But there we glimpse one of the most startling insights of all: pauses are a gift, because you’re afraid the song’s about to end, but it doesn’t, not yet. You still have time left for more.

This brilliant novel dives into a sequence of lives and perspectives, pulling us onward

with a sense of unraveling mystery. A trapeze artist suspended on a wire between the Twin Towers provides a frame and a touch point, as various characters react to his presence in the midst of their day. What connects these lives sometimes seems as slender as the wire under that artist’s feet, but it holds: we come to care about each of them in turn. My favorite is Corrigan, the conflicted priest – “a mad, impossible angel” – and I’m at first disappointed when the story moves away from him; but then near the end, we find our way back to the woman who loves him and, with a shiver, my understanding of both characters deepens. There is pain here, but also the marvel of our interconnection.

For writers: The biggest challenge of a story cycle is how to keep your readers engaged each time you change characters. McCann handles this masterfully, both by intermixing startling revelations with unanswered questions and by launching each new story in media res with a strong, distinct voice. He also plays with perspective, often revisiting the same scene more than once through a different character’s eyes. Every time he does this, we learn something surprising.

A brilliant, wide-ranging novel book about a disintegrating family: a managing mother obsessed with getting her adult children home for Christmas as if it could save her life; an autocratic father plummeting into dementia; a pompous son disturbingly dependent on his manipulative wife; a creative daughter prey to self-destructive impulses; and a clever youngest son, victim of his own bad choices. All desperate, all lost, yet grasping at life, they’re rendered so honestly and vividly that the reader can’t help but sympathize. They lurch toward each other, resisting all the way.

For writers: Franzen is exceptional at writing in an extremely close third-person voice, using free indirect style. He doesn’t simply translate his characters; he seems to pull the words right out of their heads. He once confessed to touch-typing his work while wearing earplugs and a blindfold to help him go deep. Try reading a chapter of his, then your own work, to learn what you could do to bring yours closer.

As a writer and reader, I look to books for many things: insight, beautiful language, entertainment, connection. Reading does this in a singular way. We can never be other than alone in our own heads, and yet that is where writers and readers connect, and where fiction almost magically comes to life.

Good Books for Writers and Readers